Layla’s and Poppy’s puppies are here!

Layla had her puppies April 6th, 2019. She did a great job even though every single puppy was huge! Layla is so sweet, and calm, and her puppies are the same way. Her boys came out and calmly found nipples and started nursing with no problems at all.  I was surprised that she had 5 boys. Odds are 50/50 with each birth, but the boys dominated this time. Having all boys, and all tri factored (dark) sables makes it a little challenging to tell these puppies apart. There are slight variations on the white markings, but it will be tough to tell these guys apart until they get bigger. We are excited about these puppies. It is our sweet and handsome boy, Patton’s –GCH Tairis Runnin’ Down A Dream’s- first time to be a daddy. I think he and Layla compliment each other very nicely.

Poppy got tired of Layla getting all the attention so she went into labor the next day on April 7, 2019. Poppy is a little more hyper than Layla. She carried on and needed a lot of encouragement and help getting the first puppy out. Poppy’s first puppy was almost sideways in the birth canal. I helped poke the puppy back inside and helped get it turned so it could come out feet first. There was no way except for a C-section to get the puppy out sideways. After a stressful few minutes, Poppy and I were rewarded with a squirming white girl. I was so relieved to see she was fine. I love collies in every color, but this white girl meant that she was sired by the white factored Milas stud- GCH Milas Walk This Way. The second dog I bred Poppy to (Ch Avalar Midnight Rain) is not white factored, so could not produce a white puppy. We will be doing DNA testing on all Poppy’s puppies to see which stud sired each pup. After the birth of the white girl, Poppy ended up having four sable girls, two sable and white boys and one sable headed white boy. They are all nice size puppies. some of them are quite large like Poppy.

Thank God Layla and Poppy are doing good and have enough milk, All 13 puppies are doing well. Now they are 11 and 12 days old. Soon they will be opening their eyes. They are already pretty vocal, but when their eyes open and their hearing is all there the puppy noises tend to get a lot louder. One of Laylas’s pups already managed to get out of the whelping box so it won’t be too long before I move them to the dining room Ex-pen.

I love helping bring a new generation of collie babies into the world. We plan these breedings with the goal of producing beautiful baby collies that will have the best qualities of their parents and other ancestors. I cuddle each pup like he or she will be a future best in show winner. Most will be the star of a family home, but we think both Layla’s and Poppy’s puppies have great potential to be something special. I can’t wait to watch them grow and see if they turn out to be the collies of my dreams.

I am having trouble figuring out this new website.  I’m working on it. 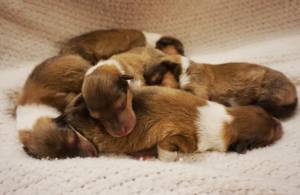 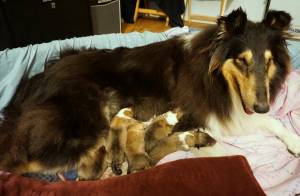 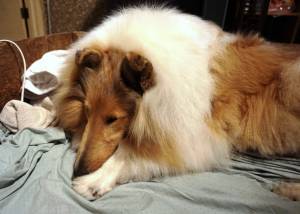 Poppy looks like she is praying her puppies will hurry up and pop out! 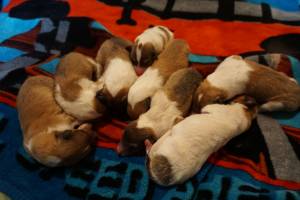 Poppy’s and Layla’s puppies at 3 weeks.